The basics of scoring the cricket scorebook 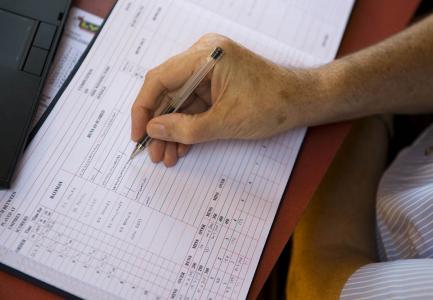 Generally our members know exactly how to keep track of the batman’s score and how to tick off the runs as the game progresses, but fewer of us know how to keep track the bowler’s scores or what needs to be entered into the book after each over. It isn’t rocket science… all it requires is a little concentration, a bit of help from a team mate who can confirm a signal or number of runs made and a proper understanding of ‘the cricket scoring symbols’

Inexperienced scorers often get the NO BALL and WIDE symbols mixed up but remembering which is which is quite easy if you liken the WIDE symbol to the umpires signal for a WIDE – standing arms out to the side in the shape of a cross. So far, so good. However, it gets a little more complicated when a combination of elements are added to the run of events:

The ‘circle’ symbol as above indicates NO BALL. But if the batsman hits the ball and scores singles, a boundary 4 or boundary 6 off the delivery, then the runs are marked inside the ‘circle’. In practice it is easier to write down the number then ‘encircle’ it. These are batsman’s runs and the NO BALL itself is a NO BALL extra.

More often you might see a NO BALL delivery elude the wicket keeper and the batsmen run byes or the ball runs to the boundary for 4 byes. In this case each bye taken is marked with a ‘dot’. Again it is easier to ‘encircle’ the ‘dots’. These and the NO BALL are NO BALL extras.

With WIDE deliveries it is common to see batsmen run byes or the ball run down to the boundary for 4 byes. Again a ‘dot’ is added for each bye that is run. These and the WIDE are WIDE extras.

The only other possible addition to the WIDE symbol is if the batsman hits the stumps with his bat or person or the wicket-keeper stumps him. The batsman would be out and a ‘W’ is added to the WIDE ‘cross’ symbol. The WIDE is a WIDE extra and the bowler is credited with the wicket.

So now we know which symbols to use, how do we interpret them in the batting, bowling, extras and totals analysis?

In the batsman’s analysis, whether we record delivery by delivery outcome or not, he would be credited with 8 runs off that over (more on this later).

In the EXTRAS analysis we add a total of 4. 1 No-Ball extra and 3 Wide extras and in the total runs tally we should have 12 as our total.

For the next over we have 2 runs, dot, dot, Wide, dot, 1 run, Bye (as these do not count against or for the bowler we do not record how many). So the bowling totals for this over would be 4 which gives a cumulative total of 16 for 0 wickets. The batsmen have added 3, BYES (lets call it 1 for this example) have been added to the EXTRAS analysis and 1 has been added to the WIDE extras. The total runs tally stands at 17.

In the third over we have a LEG BYE (as these do not count against or for the bowler we do not record how many but we’ll call it 2 for this example) a wicket, a dot ball, a NO BALL with 2 byes, 3 runs, dot and 1 run. The bowlers cumulative total stands at 23 for 1. The batsmen have a total of 15 and there are now a total of 11 EXTRAS (8 bowling and 3 fielding as example above). The total runs tally stands at 26. How do we check that this is correct? Simply remember that:

Do the math yourself and you’ll see the examples above work out exactly.

At the end of each over the scoring rate column is completed.

We also record the cumulative number of wickets that have fallen at the end of that over, and finally we record which bowler bowled the over.

If you look at the example here you see that this also provides a snapshot of how things stand in a match. In this case, 20 runs for the loss of 2 wickets at the end of the 5th over.

At league and competition level, a club usually has 1 or 2 dedicated scorers, so they are able to record all the niceties such as the bowler’s action, the number of deliveries a batsman faces, duration of partnerships etc. At our level this is difficult purely because there’s usually just one scorer who is a player and they are recording figures in those stupid little scorebooks that require the handwriting size of the tooth fairy, when what’s really needed is an A3 size scoresheet at least, and all the while they are waiting for a break so they can pad up.

The bowling figures cause problems generally because the poor sod doing the scoring has never had it explained properly and has just picked it up from a team mate who learned it exactly the same way.

Because of the limitations of space, we generally only record the batsmans runs in the batting analysis, which is a shame because most players would like some idea of the number of balls faced and their strike rate.

Properly done, the batsmans analysis would mirror the bowlers over the course of an over. So we would record every dot ball, no ball, wide, scoring ball, bye and leg bye ball delivered in their figures, although of course they are only credited with runs off their bat. This provides us with a total of balls faced over the course of their innings.

Note that when totting up you do not include WIDE deliveries as balls faced although they are recorded as a delivery – Anyway, that’s about it really.

Season : Runs from April to September, training on Thursday evenings and matches on weekends. Contact us for more information